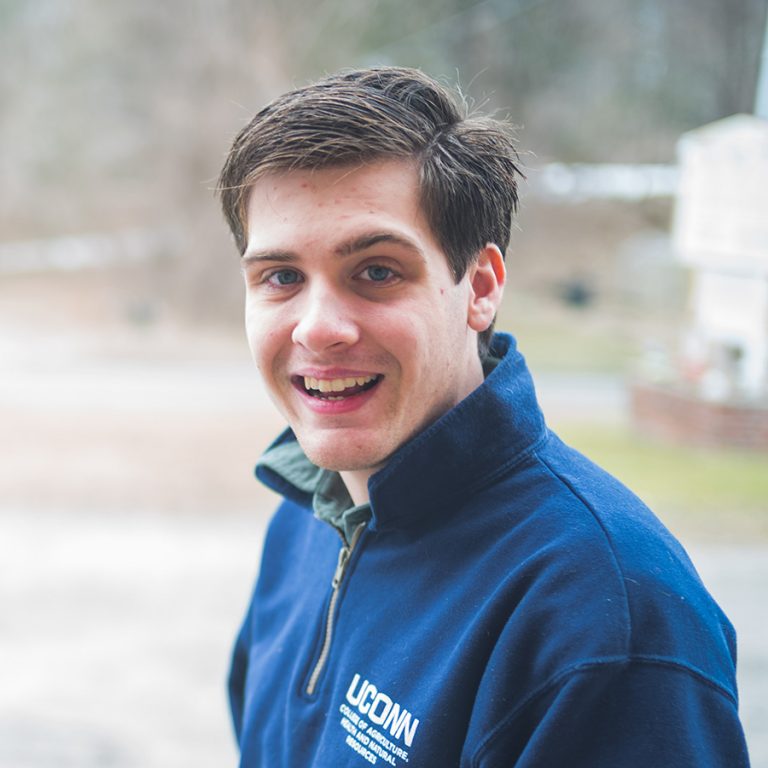 Christian Allyn is proud to call North Canaan home. He sits on the board of selectmen and owns a local business that eradicates invasive plants in the Northwest Corner of Connecticut. He’s a member of the Friends of Beckley Furnace, which works to preserve and research the historic industrial monument. He wants his town and its residents to thrive.

It may come as a surprise that Christian is 23 years old. At a time when the number of young people in our region is shrinking, Christian made the conscious decision to stay and pursue public and private sector careers in North Canaan.

“My family has lived in this town for over 300 years,” he said with a grin. “It’s been cemented that this is Canaan and this is my home.”

Christian’s local roots run deep. His family operates businesses on Allyndale Road, including Louis E. Allyn & Sons well drilling and Allyndale Limestone Corp. A UConn graduate, he attended North Canaan Elementary School and Housatonic Valley Regional High School, where he stepped into the greenhouse and discovered his passion for horticulture. Christian excitedly noted that his great-grandfather actually helped drill the well for the high school in the late 1930s.

Listen: Christian Allyn on keeping younger families in North Canaan and the region

His late grandfather, Paul F. Allyn, served as selectman from 1975 to 1977 and as first selectman from 1977 to 1981. His father, Steve Allyn, is the chairman of the Planning and Zoning Commission. Their service inspired Christian to start writing North Canaan’s state-required 10-year town plan, which serves as a guide for all municipal grants and activities, while still in college. They also sparked his desire to run for selectman in 2017.

“I sat at the polls from 5 in the morning all the way to the end at 8 at night. I was bawling when the result came in,” he said, beaming with joy and holding up a piece of paper. “Doug Humes, former first selectman, grabbed the model ballot off the wall and gave it to me. It was the culmination of my entire life. I want to make sure that Canaan is secure and the families here are secure.”

As a young person, Christian knows there are others like him who would like to stay in the community. If salaries were higher across the board, he believes they would settle down here and, in turn, help create stability in the area.

Listen: Christian Allyn on the importance of a new generation maintaining Beckley Furnace

One such building is the historic Canaan Union Depot, which was built in 1872 and tragically burned down due to arson in October 2001. Christian said that act “created an awful chapter in our town history,” but he is thrilled that the building has been renovated and will house the new Great Falls Brewing Company. “This is a new day for Canaan,” he said.

Christian is also adamant to preserve the Colonial Theatre, which opened in 1923 and was restored in 2004. He remembers walking by the venue as a child during Railroad Days, the town’s annual summer celebration.  He recalls seeing a display of bowling pins that were once part of the downstairs bowling alley. Even at that young age, he was “touched and inspired” by Canaan’s history.

“This is the cultural center of Canaan,” he said. “This is the heritage of its residents.” Aside from the occasional event, the theater’s doors are currently closed.

That interest in the town’s history inspired Christian’s commitment to the Friends of Beckley Furnace in 2012. A towering stone landmark, it was built in 1847 to make iron. Christian has spent many summer Saturdays hosting tours and providing information on the iron-making process.

“I was the youngest person to ever participate with their group. That opened the door for other young people to participate,” he said. In the fall of 2013, two seventh-grade Girl Scouts created a new website and materials to make Beckley Furnace more appealing to younger visitors.

That will mean confronting a perceived generational gap. In his view, residents from their late 30s all the way to their early 60s are not taking on leadership roles, which scares him. He says those 35 and younger have to “carry the torch.”

“If we don’t get people involved, all of this history will be lost,” he said.

Other town issues might be easier to manage, while requiring more of a hands-on approach he’s uniquely qualified to offer. Before he was elected, the Board of Selectmen made a commitment to remove all knotweed, one of the top five invasive plants in the area according to Christian. He completed treatment work along the roadsides last September with the town crew, and they’re going to keep it up this year.

“We’re trying to actively find solutions to all of these problems, and that’s part of that process of making the community better,” Christian said. “Collaboration is important. We all have to work together.”