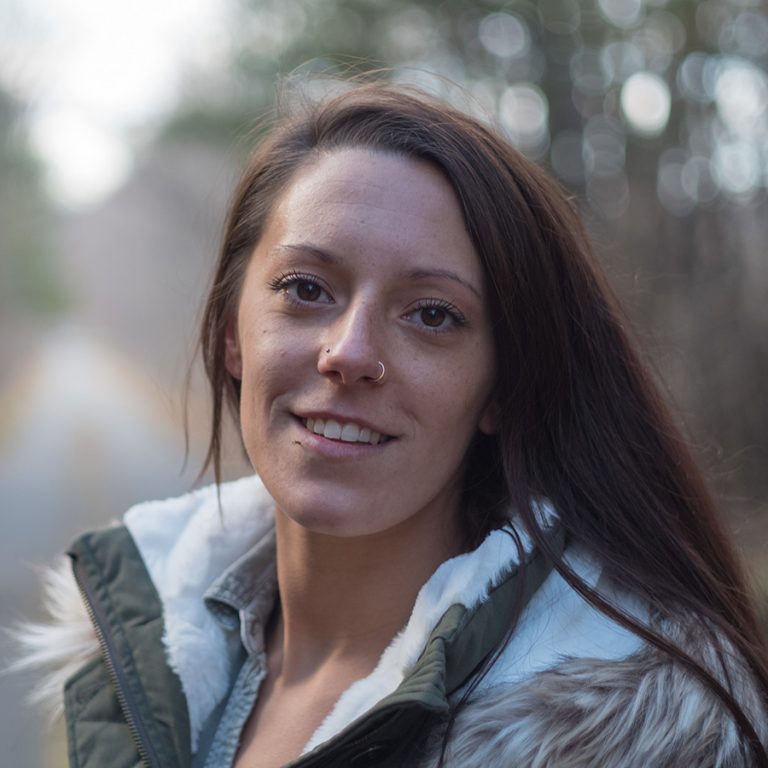 Sybrina Angot had her first taste of alcohol when she was 12 years old. That simple act led to a downward spiral of opioid addiction, arrests and alternating periods in jail and treatment facilities—and the climb back up to self-acceptance, sobriety and the drive to share her story to help others avoid her mistakes.

Sybrina grew up in Amenia, N.Y., as one of five siblings. She says she was always seeking attention and ways to cope with her overwhelming feelings of depression, anxiety and loneliness, which led to secret sips of drinks and puffs of cigarettes. She gravitated toward friends who “liked to party” and was introduced to the painkiller Percocet—and its active ingredient, oxycodone—at 16.

“That’s when it turned into a habit,” said Sybrina, who is now 24. “At the time, I didn’t know it was a habit, so I didn’t know why I was getting sick if I didn’t have the drugs. I just wanted more pills because I knew it would make me feel better.”

Soon after, the whirlwind of arrests began. Sybrina was caught with pills, marijuana and drug paraphernalia, and was placed on interim probation when she was 17. “I was a loose cannon,” she said, shaking her head at the memories. Unfazed, she continued her drug use with a cycle of probation extensions and violations.

Listen: Sybrina reflects on her journey from opioid addiction to jail to sobriety

At 18 years old, while driving under the influence in a little Volkswagen Cabrio, she hit a truck head-on. She woke up in Dutchess County Jail and remained there for a month, followed by a brief stint in a rehabilitation program. Her probation continued, but she immediately relapsed.

“When I got out of jail, my grandfather passed away. That triggered my drug use even more. The last thing he told me was not to go to jail again,” she said, her voice shaking. “And that’s where I ended up.”

Sybrina vividly remembers being handcuffed in the courtroom and dragged away from the embrace of her crying mother. At that moment, her only concern was going through withdrawal from opioids and Xanax behind bars—a painful ordeal she’d already experienced during her first time in jail.

She described detoxing while incarcerated as “the flu times 10.” She felt her skin crawl and was unable to sleep. Memories starting hazily fading in—she thought about how cruelly she acted while taking those pills, and how close she came to trying heroin. Some of the people she interacted with and places she went during that period of her life are forever lost in a fog, which she finds terrifying.

“It’s crazy how drugs can turn you into something that you’re not,” she said. “They blinded me from reality. They literally took my soul.”


Sybrina faced her demons and remained in jail for another month, followed by a year of bouncing between transitional housing, a 28-day treatment program and a months-long stay in a recovery center in Poughkeepsie, N.Y. She credits that experience with turning her life around.

“It was a huge eye-opener,” she said. “I needed structure. They told me what I could and couldn’t do, and pretty much taught me how to be a normal person and do normal things. They help you go to school and try to get a job and try to get housing. It was definitely a huge help.”

Sybrina used to keep her thoughts and feelings a closely guarded secret, but she learned how to open up when her sponsor gave her the opportunity to run a Narcotics Anonymous meeting at the halfway house. Those group sessions “flipped a switch in her head” that she didn’t need to use drugs to cope with her problems, and she wanted to share that strength with her peers. “I just started being honest,” she said.

That honesty shines through when Sybrina talks about her personal battles. She hopes that sharing her story will keep others from following the same path. She recently wrote an emotional public Facebook post to mark her fourth anniversary of sobriety, shining a spotlight on the hard times that trapped her in a cycle of addiction.

“I’m not perfect, and my recovery has been everything but easy. I just hope this reaches someone who’s struggling and it gives them a little hope,” she wrote. “If you’re struggling, please reach out to someone. Don’t be ashamed or embarrassed, because there are people like me that understand you and know exactly how you feel.”

Listen: The support of her employers and a new routine have helped Sybrina stay clean


One approach in northwest Litchfield County is aimed at reducing the drug overdose deaths that have become a public health crisis in the region. A group of organizations (including Berkshire Taconic Community Foundation and the Foundation for Community Health) and community members are attempting to delay the first use of alcohol and marijuana among students and teach them healthy ways to deal with the peer pressure, anger and anxiety that Sybrina felt when she was 12.

While she’s more than willing to discuss her past, Sybrina is happily looking toward the future. She “feeds off nature now,” which is why she enjoys her job at Old Farm Nursery in Lakeville, Conn., alongside her mother and her boyfriend, Tim. Working on landscaping projects with her mom has helped them rebuild their relationship, and Sybrina feels extremely close to her large family, who supported her throughout her treatment.

Sybrina recently obtained her driver’s license after losing it six years ago following her accident. This newfound freedom allows her to travel from her home with Tim in Torrington, Conn., and pursue her passion for nature photography, capturing images of the flowers and plants she has learned so much about at Old Farm Nursery.

She loves the routine of her job and going to the gym, taking the time to pick out clothes that match her style, shopping for her first real collection of holiday decorations, and pausing to appreciate the nature that surround her. Her hobbies and relationships have given her the strength to manage her anxiety without resorting to hold habits.

During a winter walk on the Harlem Valley Rail Trail, Sybrina stopped, looked around at the trees and took a deep breath of the brisk, clear air. She smiled. “I’m happy with who I am for once in my life.”